Most cases 70 (87%) and controls 65 (81%), resided within 3 km of a stagnant water body (p = 0.276). Majority of cases 67 (84%) and 68 (85%) controls did not have a mosquito net and mentioned that nets which had been distributed to them more than three years prior to the study were torn (p = 0.043). About 42 (53%) controls resided in refugee housing units while 41 (51%) of cases lived in houses constructed with bricks and iron roof sheets (p<0.001). Indoor residual spraying using pirimiphos methyl had been conducted in the last 12 months for 68 (85%) cases and 70 (88%) controls (p=0.646). New arrivals stay in the transit section of the camp. After the administrative processes which include registration and issuing of personal identification documents, refugees receive the core relief package which includes shelter and domestic items. Forty families that arrived after the IRS period did not receive mosquito nets and their houses were scheduled for the next IRS exercise.

Most cases 48 (60%) engaged in outdoor activities at night compared to 23 (29%) controls (p<0.001). Most commonly mentioned outdoor activities included socializing with friends and family, playing, cooking and sleeping outside during the hot summer nights. Based on self-reported travel 71 (89%) cases and 77 (96%) controls self-reported had not traveled outside the camp in the last month (p = 0.086) Key informant interviews suggested that there was illegal cross-border travel among Mozambican Nationals who would return to their homes during peak agricultural seasons to plant and harvest crops, however, this could not be verified (Table 2).

Tongogara refugee camp clinic recorded an increase in malaria cases above the alert and action threshold limits in week 12 of 2021 reaching a peak of 29 cases by the end of week 12. Thereafter, the cases declined steadily. The decline in the number of malaria cases in week 17 also coincided with the start of the winter season by the end of the month of April. The epicurve for malaria cases at TRC, Chipinge District, Zimbabwe 2021 is based on the date of diagnosis (Fig. 1).

Malaria cases were distributed throughout the 10 residential sections within TRC, however, most cases 28 (35%) came from section 7 followed by section 6 which had 13 (16%) and section 9 with 11 (14%). Mayeza Dam, which is by definition a marsh characterized by wetland frequently or continually inundated with water and typically has grasses and herbaceous plants was observed in section 7. A swampy area was also observed in section 10. Stagnant water bodies were a common feature around the camp. A bridge was constructed between section 1 and 2 near TRC clinic and stagnant water could be seen on both sides of the bridge. Figure 2 illustrates the spot map showing the distribution of malaria cases during the outbreak. 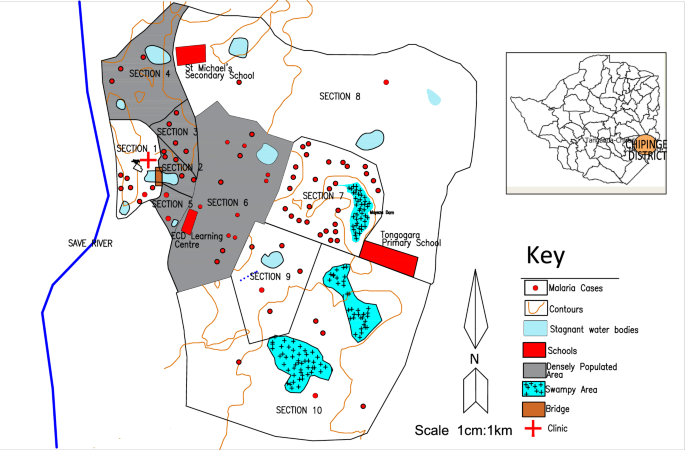 Natural vector breeding sites observed included swampy areas in section 10 and Mayeza Dam in section 7 (Fig. 3). Vector breeding sites from human activities included water from the communal taps collecting in reservoirs or ditches (Fig. 4). An irrigation scheme within the camp as well as pits created by residents as water reservoirs for gardening and waste from the piggery project also provided potential vector breeding sites. Poor waste management practices were observed as there were plastic containers and liters around the camp and in the stagnant water bodies (Fig. 5). Key informants highlighted that there was poor drainage in the camp. 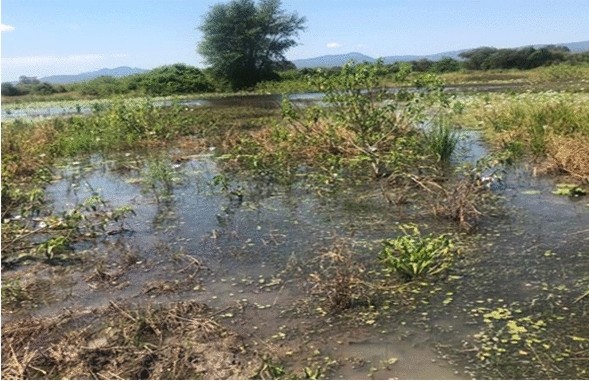 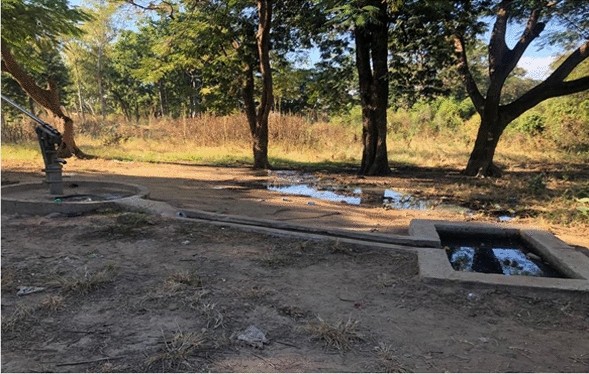 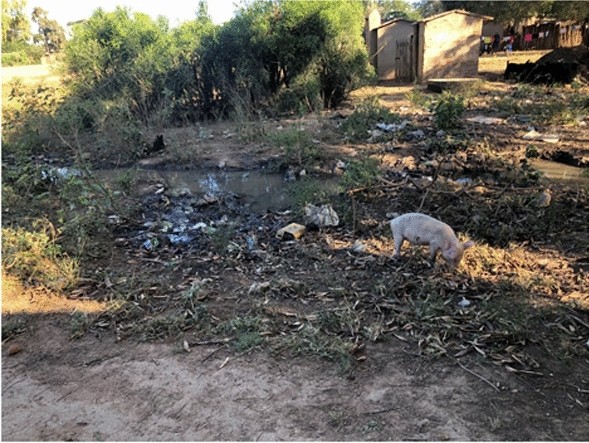 All cases were diagnosed at TRC clinic using the First Response Malaria Antigen (pLDH/HRP2) Combo rapid diagnostic test (RDT) following Ministry of Health standardized protocols. Cases presenting with mild symptoms were 43 (54%) while 33 (41%) had moderate symptoms and 4 (5%) presented with severe symptoms. Most cases 64 (80%) presented with a fever followed by a headache and chills constituting 52 (65%) and 30 (38%), respectively. There were no complicated malaria cases, and all patients were treated appropriately with co-artemether at TRC clinic according to the national malaria treatment guidelines for weight and age. No malaria deaths were reported in the camp. Most cases 78 (97%) had completed their course while 2 (3%) stopped taking their medication when the symptoms subsided. Apart from malaria treatment guidelines, there was no IEC material on malaria displayed at the clinic.

Tongogara refugee camp clinic has four nurses, one environmental health technician, one pharmacy technician and one nurse aide. An assessment of the outbreak emergency preparedness and response showed that five out of seven health workers had received previous training on malaria case management. Two nurses received training on Integrated Disease Surveillance and Response (IDSR). The remaining five health workers were not trained due to limited resources.

The emergency preparedness and response committee comprising of the camp administrator, camp coordinator, nurse, environmental health technician and a World Vision representative meets once every month. An emergency preparedness and response plan was available at TRC clinic. The malaria case management guidelines and weekly malaria threshold limits were up to date and displayed on the walls, however, there was no spot map or line list at the clinic. The malaria outbreak was detected 7 days after the onset of the outbreak and the clinic notified the outbreak to the district within the same period. However, the Rapid Response Team (RRT) initiated an outbreak investigation after 3 weeks due to limited Environmental health technicians. The district RRT investigated the outbreak 2 months after the outbreak had occurred. Long-lasting insecticidal nets (LLINs) are routinely distributed to women once during their pregnancy. The IRS coverage for TRC was 85% compared to the program reported coverage of 94%. No larviciding was conducted at the refugee camp. Table 3 shows the malaria outbreak emergency preparedness and response at TRC.

Entomological surveillance activities conducted at the refugee camp involved larval sampling and pyrethrum spray catches to determine the indoor vector density and distribution. Pyrethrum spray catches (PSCs) conducted in November 2020 in section 7 and section 10 of the camp before the IRS exercise (pre-IRS PSCs) captured eight Anopheles gambiae and 66 culicines. However, post-IRS PSCs did not capture any vectors. No further evaluations for vector density comparison were done due to limited supply of aerosol to use. To further investigate the outbreak PSCs were performed in section 7 in June 2021 and did not yield any indoor resting mosquitoes, however larval sampling conducted in response to the outbreak at Mayeza Dam in section 7 harvested 18 Anopheles larvae.

The odds of contracting malaria were 3.37 times higher when residing in a house with holes or open eaves compared those who did not. While some household had open eaves, others had makeshift windows that could not be closed (Fig. 6). 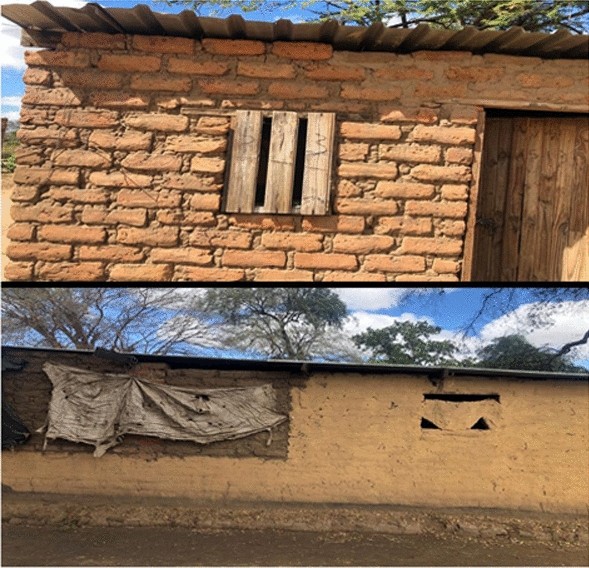 Learn how to use IFB entrance load washer demo