Dragonflies and damselflies: Why these vividly colored, mosquito-eating predators are ‘underrated’ bugs Are dragonflies and damselflies your favorite insects? Perhaps they should be.

They belong to an extraordinary group of insects that specifically target buzzing mosquitoes. And better yet, their waterborne babies feast on baby mozzies.

Mosquitoes have been in the news due to Japanese encephalitis, a virus spread by the biting insects that can have severe health consequences in some people.

‘Mosquito controllers of the world’

Nature Glenelg Trust ecologist Bryan Haywood says a population of dragonflies or damselflies at a wetland near you will consume hundreds of thousands of mosquitoes every day.

“Dragonflies and damselflies, along with bats, are the mosquito controllers of the world,” Mr Haywood said. “On certain nights, when plenty of them buzz around, they will be catching mosquitoes every 10-15 seconds.

“Saying there would be 100 dragonflies per hectare would be a conservative figure.

“Walker Swamp in south-west Victoria is about 400 hectares, so there may be something like 40,000 dragonflies. If they are each consuming 100 mosquitoes in an hour, that’s millions of mozzies every day. Clocking up speeds of 60kph

If their voracious appetite for mosquitoes and other small insects isn’t enough reason to fall in love with damsels (or dragons), then simply observing them in the wild may sway you.

Many are spectacular flyers; others are adorned in vivid shades of blue, green and copper. In the insect world, there is nothing that compares with a dragonfly for speed and manoeuvrability, according to Mr Haywood.

“Dragonflies have total control [in the air] and amazing vision,” he said.

“They can see almost 360 degrees. They can fly 60 kilometers per hour or more.” 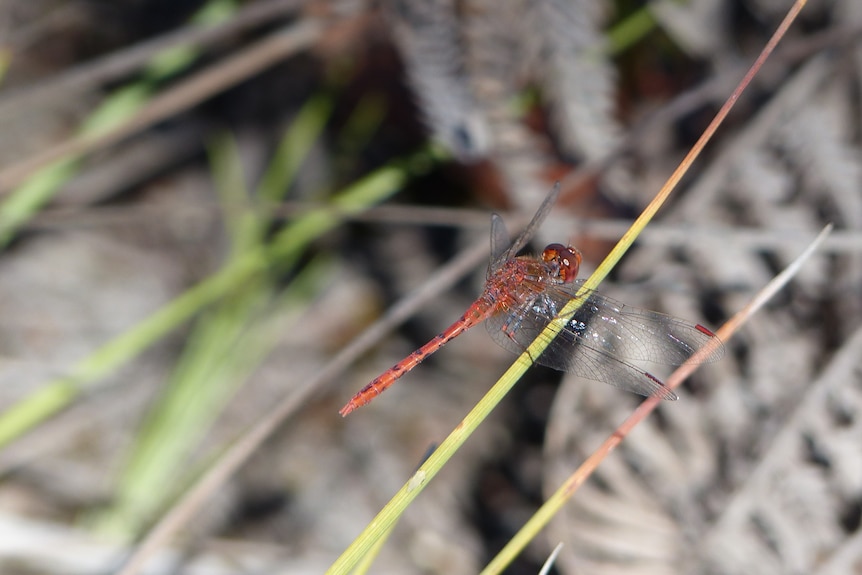 Dragonflies and damselflies are dependent on healthy waterways.

Western Victoria’s weather-than-average conditions in the past two years have been good news for many species.

“Being wetter through summer into autumn would essentially mean they have the ability to continue breeding and increase egg laying because there is more habitat,” Mr Haywood said.

“Ultimately dragonflies need water and clearly water bodies that are permanent or semi-permanent are ideal for our biodiversity. “More specifically, farm dams can be rich for Odonata, as long is there is some vegetation usually. They like pristine wetlands, but a handful of species are specific to creeks and rivers.

“Our Odonata are critically linked to wetlands, and other types of man-made or natural water areas. It’s why we ask people to be considerate of our wetlands. They really play an important role in helping our broader environment.” 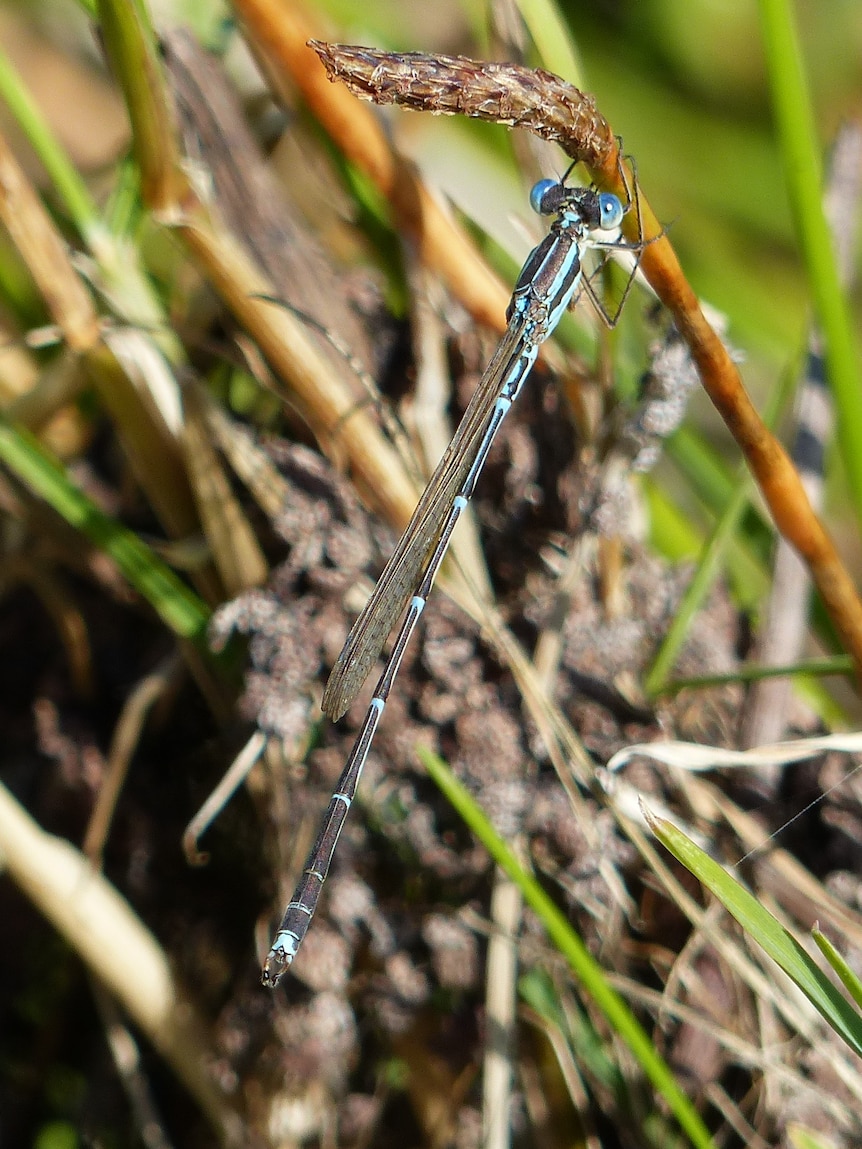 There are more than 300 species of dragonflies and damselflies in Australia.

In general, dragonflies are bigger and more robust, damselflies slimmer and more delicate.

The defining difference between the dragonflies (Anisoptera) and damselflies (Zygoptera), though, is the latter can fold their wings back neatly against their long, narrow bodies. The thicker wings of a dragonfly are permanently spread out.

Mr Haywood said identifying a species was relatively straightforward for the males. For females it could be much more challenging.

“Generally, the female is a more drab creature,” he said.

“Identification of damselflies in the field, it is difficult to be 100 per cent sure [what species a female belongs to] unless you have them in your hand. “Males are more often vivid in colour, especially blue. Female damselflies are often copper or green. The ancient greenling is probably one of the only ones that doesn’t have blue in the male.

“If you have ancient greenlings and aurora bluetails together, it can be very difficult, because both the male and female greenling look like a female bluetail, for example.” 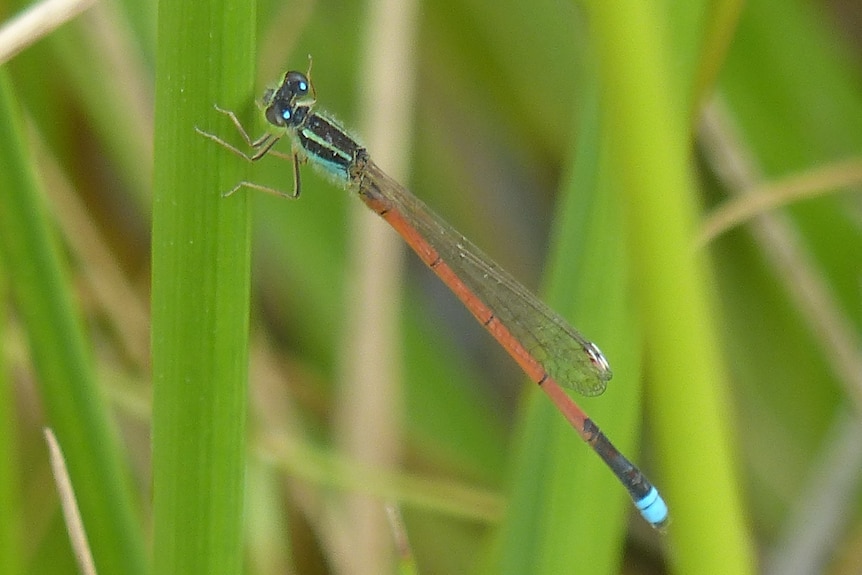 What dragonfly is that?

Blue spotted hawker (Adversaeschna brevistyla) — Wingspan of about 9cm and body length about 6cm. Males and females appear very similar. The male has blue spots on the base of the tail, while the female has green spots.

Australian Emperor (Anax papuensis) — Wingspan of 10cm and body length of 7cm. When people think of a dragonfly they are probably thinking of Australian emperors when you see a swarm in late winter and early spring. They can bite: they won’t break skin but will give you a fright.

dew emerald (Hemicordulia tau) — Medium-sized wingspan of 7cm and length of about 4.5cm. Males and females look very similar. The most widespread and common dragonfly. More common even than the Australian emperor.

Blue skimmer (Orthetrum caledonicum) — Wingspan is 7cm and length 4cm. Males and females are very different. The male is sky blue while the female is yellow and black, and are more camouflaged. Both the male and female have a bronze smudge towards the outside edges of their wings.

Wandering perch (Diplacodes bipunctata) — Wingspan of 5cm and length of 3cm. The male is red, the female is black and yellow. One of the few dragonflies you can find out in the middle of the bush and some distance from water.

What damselfly is that?

Ancient greenling (Hemiphlebia mirabilis) — Wingspan is 2cm and body 2.5cm. Male and female are essentially identical. Bottle green with a white tip to abdomen and white on their face. Still quite rare in Victoria and not a secure population.The male wags its tail and because it has a white tip you can see it fairly clearly.

Blue ringtail (Austrolestes annulosus) — So named because the male has bright blue barring across its abdomen. Generally it has a wingspan of 4.5cm and body length of 3.5cm. Can be quite abundant.

Red and blue damsel (Xanthagrion erythroneurum) — Similar size to the blue ringtail. The male is dark red, with blue tips to his tail. Females have blue on them but are not as striking as males, and duller red in colour. Flies from October through until April.

Common bluetail (I Schnura heterosticta) – Mr Haywood prefers to call it the bobbing bluetail. Medium sized with a 3cm wingspan and 2.5cm body length. Tends to bob up and down and fly in a haphazard manner. Flying October until April.

Aurora bluetail (I Schnura aurora) – One of the smallest, slightly smaller than the greenling. The male is orange to red with a blue tip to the tail, while the female is a dark green bottle. The female could be confused with an ancient greenling. Very widespread.

Slender ring tail (Austrolestes analis) — Can be extremely abundant. Seen in their hundreds. Also found away from water. At the base of the abdomen there is a blue shield marking. Can appear as early as August, right through until April.

For readers in western Victoria, if you spot a dragonfly or damselfly not on this list, the Nature Glenelg Trust would love for you to get in touch at info@natureglenelg.org.au to record what, where and when.