“The Original Cause of Trouble” was when a nine-year-old girl received a copy of Arabian Nights. At least, that’s how Freya Stark would explain her wanderlust more than 30 years later in the preface of her 1934 travelogue, The Valley of the Assassins. Fast forward more than a century later, and another book, this time female explorer Alexandra David-Néel’s My Journey to Lhasa, inspired a different young girl’s adventures to far-flung corners of the globe. That child is now British adventurer Elise Wortley, who’s about to embark on her most daring trip yet. In spring 2022, Wortley will follow Stark’s most famous journey, with only the 1930s gear Stark would’ve had, deep into the Iranian desert nestled between the Alborz Mountains, to the Valley of the Assassins.

This isn’t the first time Wortley has set off on such an adventure. In November 2017, she undertook a 108-mile trek to retrace a portion of David-Néel’s 14-year expedition in India. In faux-fur boots, Wortley walked from Lachen, India, to Kanchenjunga, the third tallest mountain in the world, at the border with Nepal. Two years later, she followed the wanderings of another female traveler, 20th-century poet Nan Shepherd, through the lochs and granite crags of the Scottish highlands.

Wortley’s upcoming trip to Iran will be her third and latest Woman With Altitude expedition, a project she launched shortly before her 2017 trip to India. The multimedia initiative combines documentary filmmaking, blogging, and charity work in an effort to highlight history’s intrepid female wanderers. On each trip, Wortley eats what those women ate, carries what they carried, and wears what they wore, forgoing modern equipment and even lip balm. The women she follows had no choice but to travel this way. Today Wortley chooses it to demonstrate just how difficult it was for these early travelers. “I kind of hope that by sharing their stories that it inspires other people” to travel on their own, especially women, says Wortley. She hopes these stories can inspire people “to be brave on a day-to-day basis as well”—something she’s felt first-hand.

From the moment Wortley first picked up David-Néel’s My Journey to Lhasa as a teenager, she immediately thought, “I need to do this. I need to see how she did this.” How did she sleep in the snow without a tent or a fire? How did she live in a cave for a year? But then life got in the way. “When I was that age, you’re kind of really funneled into life, like, you go to college, and then you either go to university or you get a job, and then that’s what you do forever. You just work and then have the weekend and that’s it.” Wortley ended up with an art degree, and then a full-time job in travel PR and marketing. “My life was literally just going to work five days a week and then just getting wasted at the weekend.”

Then she got sick. “I just got this really, really bad sort of anxiety attacks. I think they started when I was 20 and they went on for years and years,” she says. I’d feel “constantly dizzy, like my legs would shake, like I’d be terrified to get on the tube because it was enclosed, but so terrified that I physically actually couldn’t get on.” Through therapy and medication, she began to “feel normal again.”

By then she had “kind of forgotten about it all,” her dream to retrace David-Néel’s journey, “and then I found the book again,” she says. “There was one thought that I always had, which was if [David-Néel] could get on a boat to nowhere, [a place] that she’d probably seen one photograph of, you know, from Europe to India, back in 1910,” she says, “if she could do that, then I can I can go to work today.” Slowly, her dream began to reignite. “I started looking into it when I was feeling a bit better and then before I knew it I was going on this trip to this really remote bit of India.” 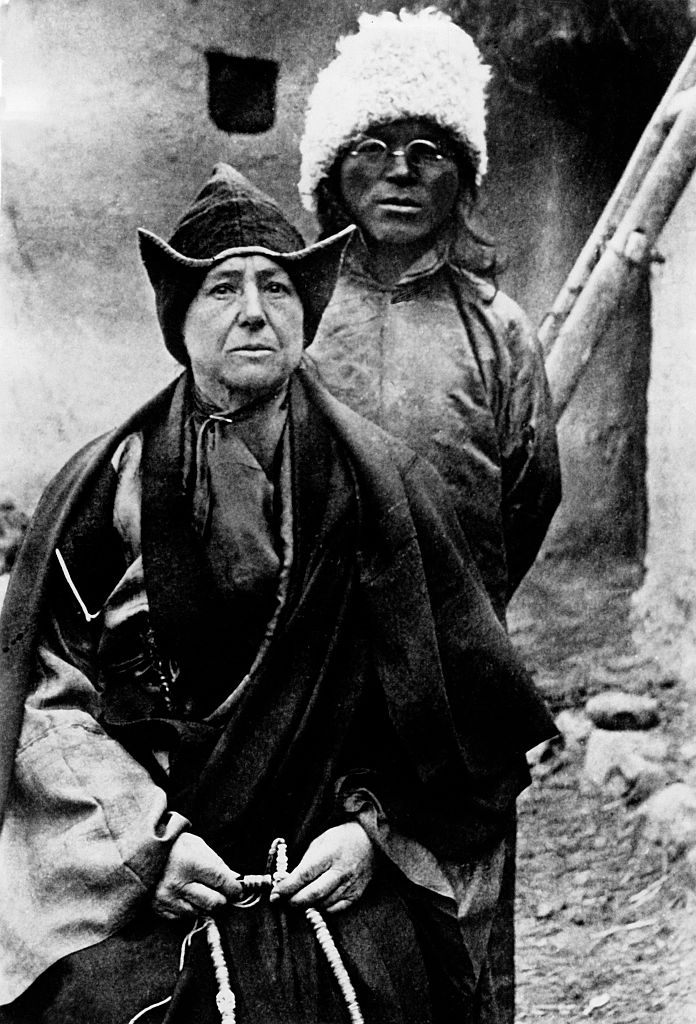 In disguise, David-Néel (here shown in the clothing of Tibetan nuns) entered Lhasa, Tibet, at a time when it was forbidden for foreigners to do so. She is considered the first white woman to visit the city. ullstein bild Dtl./Getty Images

When Wortley got back, she began looking into other female adventurers. “I have a spreadsheet of, like, 150 of these women that I had never heard of,” she says. “Wow, there’s so many! I need to do more trips.” And at the top of her list was Freya Stark. “Her book was one of the first I bought after I started researching these women because it sounded the most epic to me,” Wortley laughs. “I always say she was like a female Indiana Jones.”

Freya Stark was 37 when she embarked on the adventures history would remember her for. “She didn’t mean to be a professional traveler,” says Jane Geniesse, author of her biography, Passionate Nomad: The Life of Freya Stark. Growing up, Stark had always been a bit out of place. She was born in Paris to bohemian British parents in 1893. Though she always saw herself as British, she grew up in northern Italy and would forever speak English with an accent. Just before her 13th birthday, her hair got caught in factory machinery, which tore off her right ear and a piece of her scalp. From then on, Stark carefully combed her hair to the right and wore great big hats. A frail adult, prone to illness and often bedridden, Stark made an unlikely explorer.

Then, in 1926, Stark’s younger sister Vera died after a miscarriage. Stark later wrote that Vera died because she let other people decide how she would live. After a year of planning and scraping together some meager savings, Stark boarded a cargo ship to Beirut. She threw herself into learning Arabic, then Farsi. She began writing, even sneaking into French-controlled Syria to report on the horrible conditions French imperialists were in conflicting on Syrians. But her greatest adventure was yet to come. In 1930, Stark went to the desert mountain hideouts of the assassins. 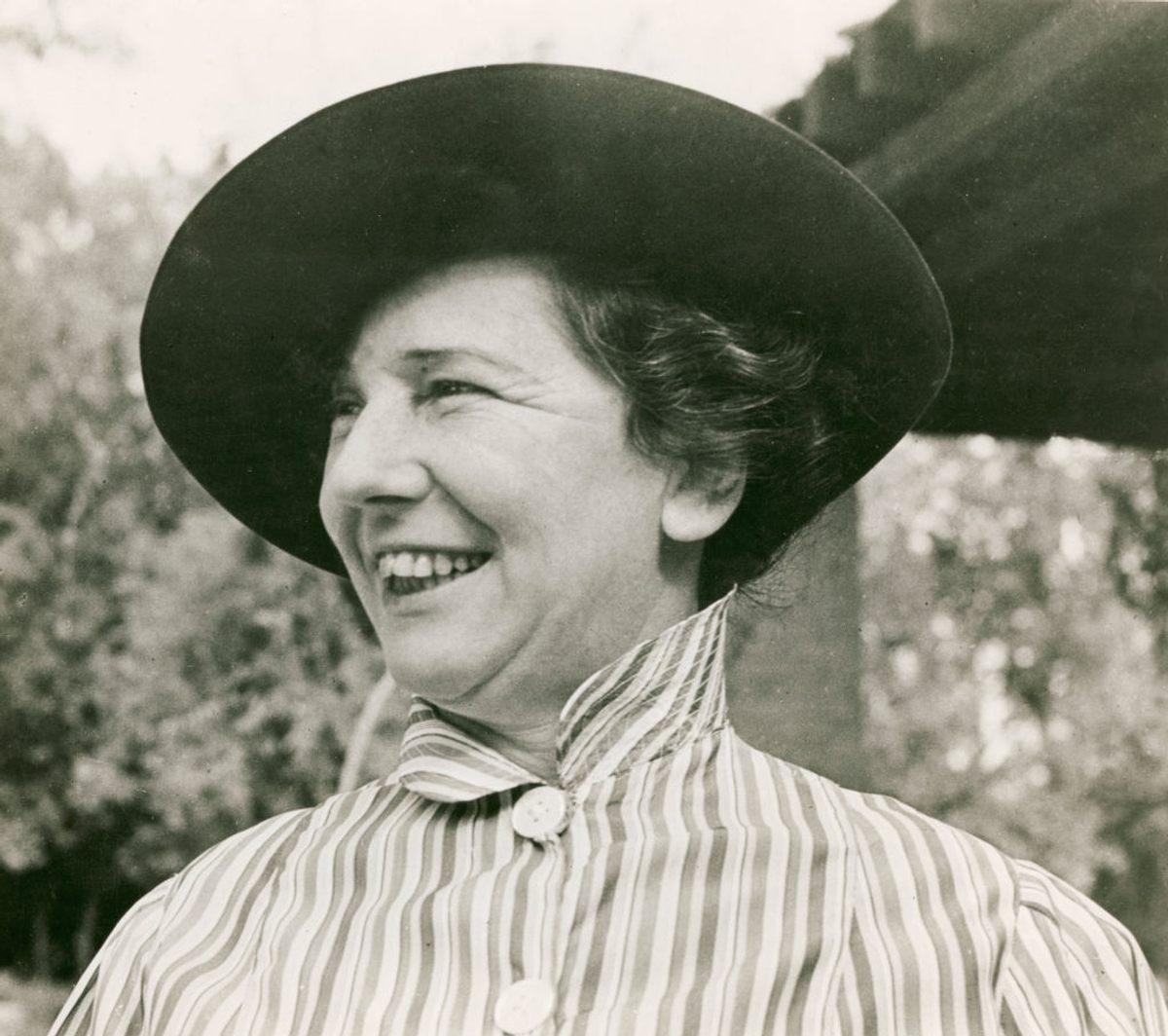 Freya Stark first visited the Middle East at 37 after scraping together enough money from working at an Italian flower farm she had purchased in northern Italy. Royal Geographical Society/Getty Images

In the early 20th century few Europeans knew of the mysterious Order of the Assassins, a sect of Shia Islam founded in the 11th century. In the medieval world, the order became infamous for their knife-wielding fighters known as fedayeen. (The English word “assassin” actually comes from the Arabic hasisi, or “hashish-eater,” a pejorative term for the group.) These fighters were trained to infiltrate, kill, withstand torture, and even die if necessary. Between 1090 and 1256, the order plotted their missions from a cluster of hilltop castles in the Alborz Mountains in what is now Iran.

Stark only had two pounds and a mule when she ventured into the mountains. Though several Europeans had visited the ruins (Stark counts “eight or nine”), there were no maps showing where exactly the ruined strongholds were. Stark, a cartographer who would later be hired by the British government for her skill, set out to change that. As she traveled, she mapped what she found. When she reached the “masses of debris” that marked the order’s Castle of Nevisar Shah, Stark reflected, “People who know nothing about these things will tell you that there is no addition of pleasure in having a landscape to yourself. But this is not true. It is a pleasure exclusive, unreasoning, and real: it has some of the quality and some of the intensity of love.”

The book she would write, The Valley of the Assassins, intertwined poetic musings with witticisms (“​​The great and almost only comfort about being a woman is that one can always pretend to be more stupid that one is.”) and stark realities (encountering a seven-year-old bride). It quickly became a bestseller. “She went back to London. She was awarded a prize by the Royal Geographic Society,” says Geniesse. “She was becoming a celebrity.” 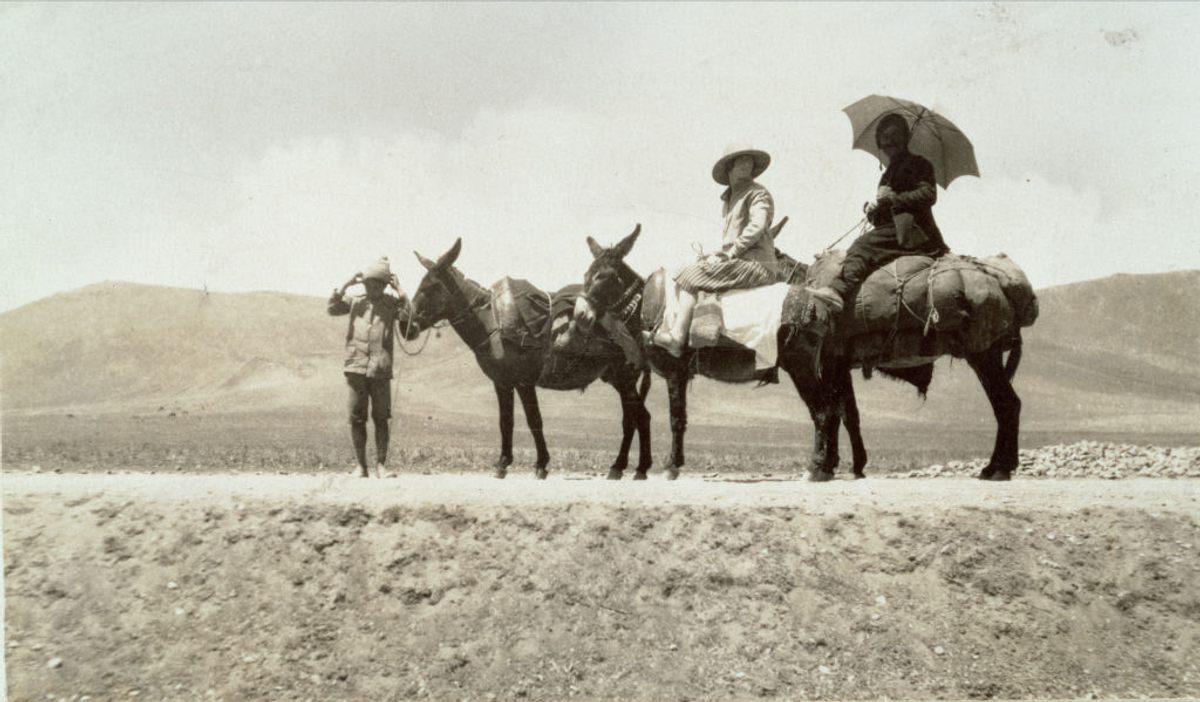 Freya Stark was often annoyed to find herself compared to another famous traveler, Gertrude Bell. She once noted the Bell traveled with, “three baggage mules, two tents, and three servants: so I consider we were the more adventurous.” Royal Geographical Society/Getty Images

There’s nearly 100 years separating Stark’s adventures and Wortley’s. Aside from modern medicine, Wortley will be traveling just as Stark had in 1930—even down to 1930s underwear. “I’ve got a clothes designer who’s helping me with the outfits,” says Wortley, who is basing her clothing off a portrait of Stark in traditional Persian attire. “She basically had a mule and a camp bed and a mosquito net and that’s pretty much it.” While the camp bed and mosquito net are fairly easy to come by, Wortley needed to recruit the help of an Iranian fixer named Laleh to track down the mule. “I feel like I might get quite attached to the mule,” laughs Wortley. “I’m quite attached to it already!”

British citizens can only visit Iran on a government-approved group tour. So with Laleh’s help, Wortley wrote up an itinerary and designed a tour around Stark’s 1930 journey. With her all-female team, which includes Laleh, an Iranian guide, documentary filmmakers Emily Barr and Chloe Dahl, and the mule’s owner (who apparently is also quite attached to the mule), Wortley will follow Stark’s path for 15 days through the arid mountains. 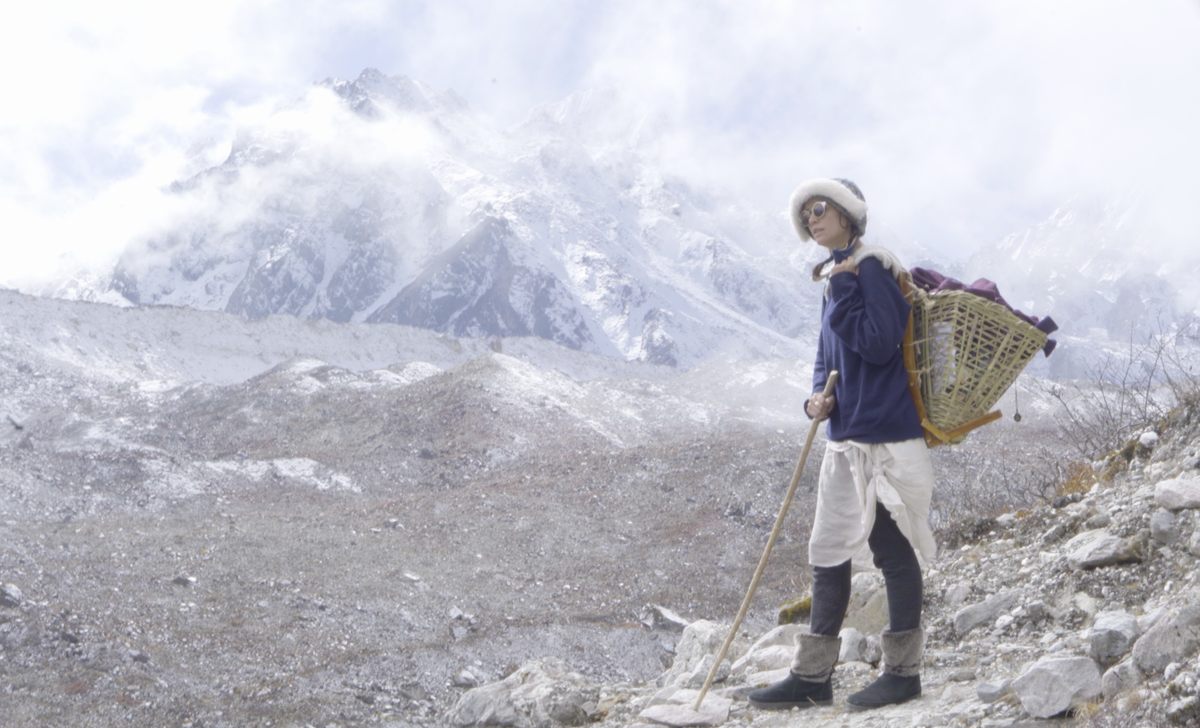 Wortley built the wooden backpack she used while retracing David-Néel’s journey from a chair she found on the street in London. Courtesy Elise Wortley

The Alborz Mountains are quite different today than they were in 1930. There are ski resorts and the bustling city of Qazvin, but Wortley still hopes to capture something of Stark’s original adventure. “Along the way, we’re going to stay in homes and houses, which is what Freya did as well, which will be amazing because we’ll really experience Iranian hospitality and meet loads of people, which I love doing,” says Wortley . The team will be there in May, the same time of year Stark was there, when temperatures can easily hit 80 degrees Fahrenheit in the valleys, though the mountain passes will still be snow-covered. “It’ll be quite warm, which will be amazing because all my trips so far have been freezing,” says Wortley. While his David-Néel trip was partially self-funded, Intrepid Travel company has agreed to sponsor Wortley’s upcoming excursion.

One goal of the trip is to highlight the female team Wortley’s been working with, especially her Iranian guides and fixers. “I guess the whole point is kind of to show that women are out there doing it,” she says.

Following her adventures in Persia and the publication of her first book, Stark went on to write 23 more, work as a spy during World War II, and get knighted—all while wearing fabulously eccentric hats. She “wanted a different sort of life,” says Wortley. “I’ve sort of realized maybe that’s what I’m trying to do.”