The study was conducted at Mosquito City, Ifakara Health Institute’s semi-field system, located near Kining’ina village (8.11417 S, 36.67484 E), approximately 5 km north of Ifakara town, Tanzania, in the dry season, on 72 nights (ie 3 experiments × 24 nights) between September 2020 to February 2021 [13, 14] (Figure 2). Briefly, the semi-field system is a large outdoor cage constructed with a metal-framed shell and mesh walls, supported on a concrete floor 4.53 m high and 553 m2 in area (Fig. 2) [15]. The building contains six identical chambers, each 9.6 m × 9.6 m in floor area, with side-walls 4.1 m high, each housing an experimental hut. In each chamber, the floor is covered with local soil to a depth of 400 mm, which allows vegetation to grow inside [14, 16]. Each night, four chambers were used: two with one typology of hut and two with a comparator hut.

A randomized block design was used to allocate treatments to the four chambers in four-night blocks. This was a balanced design such that every possible combination of hut typologies had been tested after six blocks, with each hut typology being tested in each chamber for three blocks (Additional file 1: Table S1). At the start of each experiment, one sleeper was randomly allocated to a hut, and then rotated between huts for the following three nights, such that at the end of a four-night block, each man had slept in each hut six times. This design allowed quantification of the effect of the hut typology, adjusting for variation from night to night, sleeper and chamber. For each experiment, light traps were used to collect mosquitoes indoors for four nights each week for six weeks (n = 24 nights).

Three experiments were carried out using four experimental huts each occupied by an adult man. There were two huts in each study group and each hut was situated within a large-screened cage (Fig. 2). Each night 300 An. arabiensis female mosquitoes were released in each cage outside the hut and collected indoors using CDC light traps. Experiment 1 compared huts with light-permeable walls with light-opaque walled huts and was designed to assess whether more mosquitoes entered huts with light-permeable walls compared to those with opaque walls. Experiment 2 compared shade-cloth walled huts with openings under the corrugate roof, which mimicked Star homes, with similar huts without holes under the roof. This was designed to determine whether the small-roof openings increased mosquito entry. Experiment 3 compared ‘Star home’ style huts with traditional mud-walled and thatched roof houses, replicating the typologies of housing found in the RCT study area. The experiments are summarized in Fig. 3. 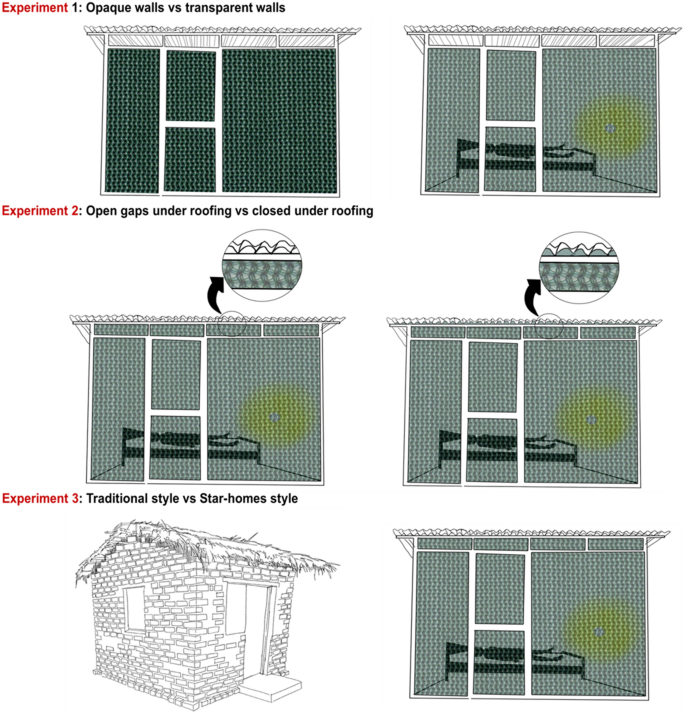 Summary of experiments. The reference hat in each experiment is shown in the first column of each row. In each experiment, local badly-fitting doors were mimicked by adding narrow gaps above and below each door

Details of the experimental huts are shown in Fig. 3 and in the Additional file 1. In experiment 1, huts with light-permeable walls were compared with light-opaque walled huts. Importantly, the walls consisted of two layers, the external layer was shade cloth and the internal layer clear or opaque plastic. This design compared the effect of light alone, keeping the indoor temperature similar in both hut typologies. Each hut was constructed using 25.4 mm2 iron-metal frames and measured 2.62 m × 1.86 m in floor area, with 2.0 m high walls with 150 mm high eave gaps immediately under the over-hanging roof. In each hut, there was one metal door, 1.75 m high and 75 cm wide, with a 20 mm high by 750 mm wide slit above and below the door, to simulate a badly-fitting door common in villages. The roof was made of corrugated sheeting with a sloping flat design.

In experiment 2, the Star home-style huts were a similar design to those described in experiment 1, although in this experiment there was no internal panels of plastic sheeting, and the eaves gaps were either open or closed. This experiment compared huts with small gaps (24 mm wide and 18 mm radius) which form under the corrugate-roofing panels when lying on purlins (horizontal beams along the length of the roof supporting the rafters), with huts with these roofing holes plugged with sponges (Fig. 3).

In experiment 3, the Star home-style hut described in experiment 2, was compared with a traditional-style hut common in Tanzania and other parts of sub-Saharan Africa, (Fig. 3). The traditional hut had a floor area of ​​3.1 m × 2.7 m, with walls 1.8 m high. These huts were constructed with burnt-brick walls, 90 mm thick, with gabled, thatched roofs, 50 mm thick, with 200 mm open eaves on all sides of the hut. The hut had one door at the front, 1.75 m high and 0.75 m wide. There were four windows 0.56 m × 0.56 m in size, one on each side of the hut. Although windows were closed during the experiments, they had 5 mm wide gaps on the vertical side of each window to simulate poorly fitting windows.

Sleepers were recruited to the study after providing their signed consent and tested for malaria parasites using a rapid diagnostic test (paraHIT®f, Span Diagnostics Ltd, Sachin (Surat), India). All tested negatives. The men did not smoke, drink alcohol or use perfume during the study.

Three hundred, unfed five-to-eight-day old female laboratory-reared An. arabiensis were released in each chamber each night, 3 m from the front door of each hut at 18:30 h. One man, between 18 and 35 years old, slept in each hut under an intact insecticide-treated net (Olyset nets, Sumitomo Chemical, Arusha, Tanzania), measuring 0.9 m wide × 1.8 m long × 1.8 m high. Sleepers entered the huts at 7:00 p.m. and left at 7:00 a.m. the next day. Mosquitoes were collected from each hut using a CDC light trap (incandescent light, Model 512, BioQuip product, California, USA), with the bulb 1 m above the floor at the foot end of the bed and operated from 19.00 h to 07.00 h. Mosquitoes from the light trap were collected and killed by exposure to chloroform. Any remaining mosquitoes were cleared from inside and outside the huts each morning using a mechanical aspirator (Prokopack®, model 1419, John W. Hock Co., Gainesville, USA). Mosquitoes from the light trap and aspirator collections were counted (Additional file 1).

The primary outcome was the proportion of host-seeking and resting An. arabiensis collected inside each hut each night using light traps and Prokopack aspirators, respectively. Secondary outcomes were mean indoor temperature and mean indoor carbon dioxide concentration recorded between 19.00 h and 07.00 h.

Sample size was estimated based on a previous study [17] done at the study site where the mean number of An. arabiensis collected per trap per night was 10.4 (SD = 21.5). The sample size simulation was based on a negative binomial distribution to detect a 50% reduction in indoor mosquitoes at the 5% level of significance with 90% power, 24 nights (six weeks) of experimentation was sufficient.

Data analysis was done with R (version 3.3.2) [18]using lme4 [19, 20]and dplyr [21] packages. Mosquito count data were modeled using generalized linear mixed effect model (glmer) using a binomial distribution to account for a log-link function. The recaptured mosquito count numbers per SFS chamber in a particular night were represented as a proportion of the released mosquitoes in the specific chamber. The response variable was the proportion of mosquitoes caught in light traps, while hut typology was included as fixed factors. The sleeper, chamber ID and nights were included as fixed effects. Model coefficients were exponentiated to obtain the odds ratios (OR) and 95% confidence intervals. Adjusted mean nightly difference of temperature, relative humidity and carbon dioxide concentrations together with its (95% CI) values ​​per night/hut typology were calculated using linear mixed effect model (lmer) modeled using a normal distribution. Analysis of variance was used to assess the significance level (p-value) of mean difference of environmental conditions obtained from the huts typology/night. In experiment 3, matched-paired t tests were used to compare the mean indoor carbon dioxide concentrations in each hut type with the mean outdoor concentrations.