Feasibility, acceptability, and effectiveness of non-pharmaceutical interventions towards infectious illnesses amongst crisis-affected populations: a scoping evaluate | Infectious Illnesses of Poverty Selection of sources of evidence

Characteristics of sources of evidence

Characteristics of publications and setting

Approximately one-third of the studies (n = 53, 33.5%) were of community measures, most of which (n = 32) were studies of risk communication and community engagement (RCCE), while the bulk of the remainder were assessments of WASH activities (Fig. 3). Just two studies examined each of physical distancing (both during an EVD outbreak in DRC [68, 69]) and travel-related measures (both of pre-departure screening of refugees on the Thai-Myanmar border migrating to the USA [75, 81]). One quarter of the studies examined each of surveillance and response (n = 42, 26.6%) and individual (n = 38, 24.1%) NPIs. Among the former, most studies (n = 33) investigated active case detection (ACD), while among the latter, half (n = 19) focused on vector protection and a quarter (n = 9) on hand hygiene. Of the 21 studies that explored environmental NPIs, the vast majority explored vector control, with a small number looking at cleaning, disinfection, and waste management. 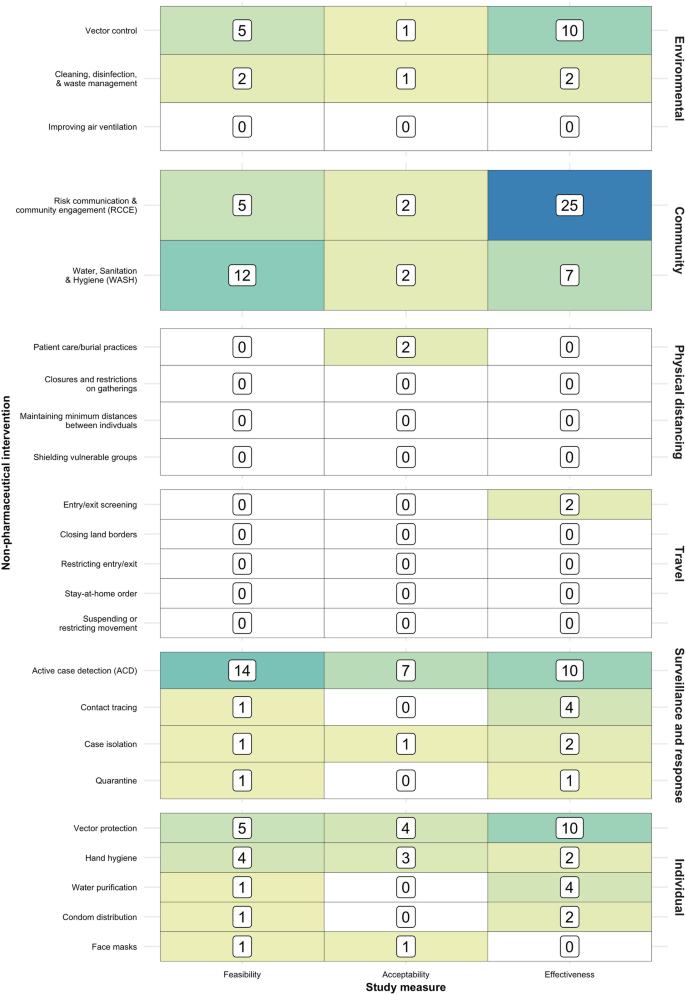 Heatmap of study volume by non-pharmaceutical intervention and study measure

Assessments of effectiveness accounted for approximately half of the studies (n = 81, 51.3%), three-quarters of which were quantitative and one-quarter qualitative. Feasibility assessments accounted for one third of the studies, while the smallest category of research type was acceptability. Acceptability studies were mostly quantitative (n = 14, 58.3%), while feasibility studies were mostly qualitative (n = 32, 60.4%).

Critical appraisal within sources of evidence

Case studies, the lowest ranking design on the quality rating scale, were the predominant study design (n = 57, 36.1%, Table 2). Cross-sectional studies and “pre-post evaluations” (studies with an ecological design comparing measures of interest before and after the introduction of an intervention but lacking a control group) each made up nearly one quarter of studies (n = 38, 24.1%), The highest-ranked study designs, namely controlled intervention, cohort, and case–control studies, accounted for just one-sixth of included studies (n = 25, 15.8%).

Most interventions described were of short (under one year) duration, with a maximum of 12 years (IQR: 0–1, range: 0–12). The median delay between the start of the intervention and publication was three years (but with a very long-tailed distribution of up to 22 years, IQR: 2–4, range: 0–22].

The full results of the scoping review are shown in Additional file 1: Table S2, which have been summarised in Table 3 and in the following text.

Table 3 Summary results of scoping review of the feasibility, acceptability, and effectiveness of non-pharmaceutical interventions, and their overall appropriateness for targeted application within crisis-affected settings

While few studies assessed the acceptability of IRS, a cross-sectional survey within Afghan refugee settlements in Pakistan reported that incomplete coverage was due to the absence of household decision-makers during implementation [38].

Substantial evidence indicates IRS can (cost-)effectively reduce malaria incidence and mortality in camp and camp-like settings, including in Sudan [43], Pakistan [38, 58, 90, 92] and Myanmar [118]. To ensure effectiveness, insecticide resistance, the timing of IRS implementation and malaria transmission, and the endophily and endophagy of the target vector must be considered [86, 92]. Case-studies suggested that the application of insecticide (IRS, larvicide or fogging) can reduce exposure to a range of mosquito species following extreme weather events [37, 100], though the impact is likely to be location-, intervention-, or vector species-specific [54].

Quantitative evidence of feasibility of cleaning, disinfection and waste management was limited to a single case study of drinking water container disinfection during a shigellosis outbreak in an IDP camp in Sudan, with 88% of containers disinfected within five days [112]. Logistical issues, including stock shortages, have been qualitatively identified as a limiting factor in WASH intervention feasibility within IDP camps [78].

A cross-sectional study conducted during a cholera outbreak in post-earthquake Haiti found high acceptability of household disinfection kits (97.6% uptake) [48]. Qualitative evidence within multiple IDP camps and across various socio-cultural settings indicated concerns regarding the use of chlorine, including fears of poisoning or sterilisation and unfavourable smell which, when combined with ineffective communication, may reduce the acceptability of this NPI [78, 112].

Evidence on the effectiveness of cleaning, disinfection and waste management on infectious disease transmission is highlighted by a case–control study in Dadaab refugee camp, which found that inadequate WASH interventions were associated with increased cholera risk [49].

RCCE interventions were found to be highly feasible for communicating risk of cholera [87], hepatitis E [108], malaria [113], and HIV [106]. Sex and age differences were reported, with seeking treatment at health facilities, notifying sexual partners about symptoms, and adopting protective barriers well adopted among men but less among women, highlighting the importance of population-targeted messaging [44].

Effectiveness of RCCE was contextually dependent. Educational campaigns were generally highly effective for STIs. Community sensitisation programmes were associated with increased rates of HIV testing and case detection [80, 87], while education and radio messaging campaigns improved STI risk awareness and behaviour [44, 106, 113]. However, STI education campaigns in Ngara refugee camp, Tanzania, were found to be ineffective, with no apparent impact on sexual behaviour and with STI prevalence increasing over time [72].

WASH RCCE campaigns were largely effective at improving hand-washing behaviour [77], knowledge of prevention strategies [98], and reductions in consumption of unsafe water [50] and water-borne illness morbidity and mortality [50, 63, 74, 85, 107]. Waste disposal education was also associated with reduced latrine blockages in an informal settlement in Dhaka [116]. However, awareness campaigns did not lead to a change in water purification behaviours in Kathmandu [99].

RCCE campaigns, in conjunction with insecticide-treated net (ITN) distribution, were highly effective at improving knowledge on the causes of malaria and correct use of ITNs [88, 103], and education campaigns aimed at improving awareness of dengue led to an increase in knowledge of the disease and vector [35]. Education campaigns for tetanus were found to substantially increase vaccine uptake in a refugee camp in Darfur, Sudan [34]. RCCE was implemented with success for tuberculosis (TB) treatment, reducing default [102] and increasing health seeking behaviour [97].

During an EVD outbreak, a majority of respondents to a qualitative survey believed that RCCE contributed to the response efforts [68], although one study in the same setting reported difficulties in communicating health information due to language barriers, which, once addressed, improved RCCE effectiveness [76]. Language barriers were also reported to have led to community mistrust and decreased effectiveness of cholera outbreak interventions [78].

Establishing WASH services was often feasible, but financial constraints [36], sustainable maintenance [117], and implementation were important challenges reported [49]. Establishing trust between stakeholders was identified as a key determinant of successful implementation [39].

One study explored the acceptability of WASH interventions in six IDP camps in Borno State, Nigeria [78]. Overcrowding and distance from home caused lack of acceptability of communal latrines, while chlorine use required the mobilisation of trusted members of the community to enhance acceptability.

We identified just two studies exploring physical distancing NPIs, both of which were cross-sectional studies of the acceptability of these measures during an EVD outbreak response in DRC. They reported low acceptability of burial practices that excluded touching the corpse [68, 69] and a willingness to hide suspected Ebola-positive family members from health authorities [68].

We identified just two studies exploring travel measure NPIs, both of which were quantitative effectiveness studies of exit screening of refugees in camps on the Thai-Myanmar border [75, 81]. A case study reported that screening of 15,455 people for TB led to the detection of 272 cases [81], while a pre-post study reported that the introduction of pre-departure screening led to a substantial reduction in helminth infections and associated moderate-to-severe anemia [75].

ACD for HIV and TB was judged to be both feasible [79, 80, 110] and acceptable [80] in refugee camps in Sudan and Uganda, while ACD of diarrhoeal disease by household visitation and mobile phone surveillance was feasible, but limited by technical issues, lack of treatment follow-up and by poor information sharing and coordination [36, 42]. For case detection of human African trypanosomiasis, passive screening at health facilities was easier to implement than ACD among refugees in South Sudan [83], while widespread ACD among a rural, conflict-affected resident population in the DRC was prevented by conflict and instability [109].

Desire for knowledge of HIV status, peer encouragement, and provision of a “package” (including RCCE and bundling with tests for other diseases) were key to the high acceptability of HIV voluntary counselling and testing (VCT) observed in informal settlements [60, 87]. ‘Opt-out’ and community-based screening strategies increased access and uptake, particularly among high-risk groups [65, 80, 87]. In a refugee camp in Sudan, refusal of TB screening was associated with a fear of negative consequences of a positive test result, linked to the status of refugees within the host country and lack of trust [110].

ACD contributed to improved TB detection, defaulting rates, and treatment outcomes among TB patients in informal settlements and among refugees [45, 71, 81]. In IDP camps in the Central African Republic, screening for malaria by rapid diagnostic test (RDT) led to a very high percentage (98%) of positive cases receiving appropriate treatment [96]. In a refugee camp in Tanzania, a combined ACD and RCCE approach ensured that most cholera patients arrived in a stable condition, improving their chances of survival [85]. Similarly, a mixed ACD and RCCE programme resulted in more refugees screened and more HIV+ patients detected in a refugee camp in Uganda [79].

Contact tracing was feasible for the detection and management of an influenza A outbreak in a post-disaster setting in the USA [67]. It was also feasible and effective for TB control among Syrian refugees in Jordan [56] and in an informal settlement in Haiti [71], leading to the identification of additional cases of latent TB.

In conflict-affected settings in Central Africa, isolation of EVD cases was reported to have low acceptability [69], despite reducing mortality and leading to shorter outbreak duration [82]. Case isolation, in combination with other measures including personal hygiene and mask wearing, was found to be effective at reducing the attack rate of influenza A during an outbreak in temporary shelters in Japan [61].

The sole study on quarantining reported that a community-imposed quarantine on household members of an uncooperative EVD case successfully prevented the spread of the disease [82]. Further details were unavailable.

Personal vector protection measures (ITN and mosquito repellent) were reported to be both highly feasible [100] and acceptable [57], with user costs being the only important barrier noted. ITNs were highly effective in reducing malaria infection risk in various settings [91, 93, 95, 118].

The feasibility of implementing hand hygiene measures was context-specific, with uptake of measures and a reduction in disease incidence seen in shelters following natural disasters [55] and among refugees displaced by conflict [108]. Conversely, substantial issues with feasibility were observed during a norovirus outbreak in a refugee camp in Germany, owing to a lack of water supply, alcohol-based sanitizer, and language barriers [52]. Acceptability issues due to cultural differences in eating habits were also reported [52]. Hand hygiene, in conjunction with other preventative measures, was found to be effective at reducing the influenza A attack rate during an outbreak in a temporary shelter following the Tōhoku earthquake in 2011 [61], and no infectious disease outbreaks were detected following the 2004 tsunami in Aceh, Indonesia where soap and hygiene kits were distributed [74]. Age-differentiated effectiveness was also reported, with handwashing effective against dysentery among children aged over 5, but not those younger, in an informal settlement in Kolkata [101].

Bottled water distribution in a temporary shelter following an earthquake in Sichuan Province, China was feasible in the short term, but sustainability was problematic [117], while water purification and the distribution of improved water containers was highly effective at reducing the occurrence of diarrhoea among refugees in Africa [46, 50, 89].

Condom distribution had mixed effectiveness, with one study finding a substantial reduction in high-risk sexual behaviours among refugees in Liberia and Sierra Leone [113], while another found no effect on sexual behaviour among Rwandan refugees, with an increase in STIs reported over the intervention period [72].

Face mask distribution was found to be feasible, acceptable, and effective when used in conjunction with other control measures aimed at preventing and reducing the spread of Influenza A among populations living in temporary shelters following natural disasters in Japan [55, 61].