Genetically modified mosquitoes could possibly be launched in Florida and Texas beginning this summer season – silver bullet or leaping the gun? This summer, genetically modified mosquitoes were released in the USA for the first time

On May 1, 2020, Oxitec received an experimental usage permit from the U.S. Environmental Protection Agency to release millions of genetically modified mosquitoes (identified by Oxitec as OX5034) weekly in Florida and Texas for the next two years. Women of this type of mosquito, Aedes aegypti, transmit dengue, chikungunya, yellow fever and Zika viruses. When these lab-bred genetically modified males are released and mate with wild females, their female offspring die. Continuous large-scale releases of these OX5034 GM males should eventually cause the temporary collapse of a wild population.

However, as vector biologists, geneticists, policy experts, and bioethicists, we are concerned that the current government oversight and scientific evaluation of genetically modified mosquitoes does not guarantee their responsible use.

Coral reefs that can withstand rising ocean temperatures, American chestnut trees that can survive the plague, and mosquitoes that cannot spread disease are examples of how genetic engineering can change the natural world.

Genetic engineering offers humans an unprecedented opportunity to redesign the basic structure of the biological world. However, as new advances in genetic decoding and gene editing emerge with speed and enthusiasm, the ecological systems that they could alter remain enormously complex and under-discussed.

Recently, no group of organisms has received more attention to genetic modification than mosquitoes – to produce unreliable offspring or to render them unsuitable for the transmission of disease. These strategies offer significant potential benefits to the hundreds of millions of people affected by mosquito-borne diseases each year.

Although the EPA has approved the approval for Oxitec, state approval is still required. A previously planned release of an earlier version of Oxitec’s GM mosquito (OX513) in the Florida Keys was withdrawn in 2018 after a referendum in 2016 indicated significant resistance from local residents. Oxitec has tested its genetically modified mosquitoes in Brazil, the Cayman Islands, Malaysia and Panama on site.

The public forum on Oxitec’s latest permit application received 31,174 comments against publication and 56 in support. The EPA has taken these into account in its review process.

Time to re-evaluate the risk assessment?

However, it is difficult to assess how EPA regulators weighted and considered public comments and how much of the evidence used for the final risk determinations was provided solely by the technology developers.

The closed nature of this risk assessment process concerns us.

There is a potential bias and a conflict of interest when experimental studies and environmental risk assessments do not have political accountability and are carried out by or in close collaboration with technology developers.

This scenario becomes more problematic for a for-profit technology company if it does not conduct cost-risk-benefit analyzes that compare genetically modified mosquitoes with other approaches.

Another problem is that risk assessments tend to focus only on a narrow set of biological parameters – for example, the potential of the genetically modified mosquito to transmit disease, or the potential of the mosquito’s new proteins, an allergic one in humans Triggering a response – and neglecting other important factors biological, ethical, and social considerations.

To remedy these shortcomings, the University of Illinois’ Institute for Sustainability, Energy and Environment, Urbana-Champaign, called a “critical discussion” about genetically modified mosquitoes. The discussion included 35 participants from academic, government, and nonprofit organizations around the world who have expertise in mosquito biology, community engagement, and risk assessment.

An important finding from this conversation was the urgent need to make the regulatory process more transparent, more comprehensive and protected from prejudice and conflicts of interest. In short, we believe it is time to reassess the risk assessment for genetically modified mosquitoes. Here are some of the key items we recommend. 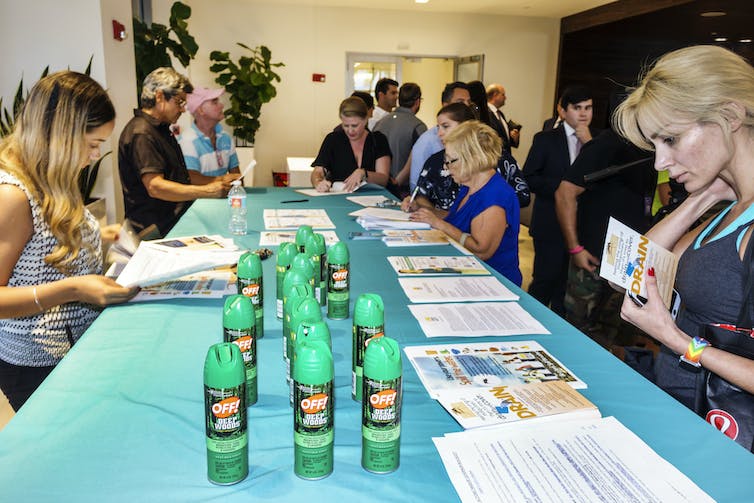 The mosquito spray OFF! was given away for free at the Zika Virus Town Hall Meeting at Waverly Condominiums in 2016.
Jeffrey Greenberg / Universal Images Group via Getty Images

Steps towards a more open and comprehensive risk assessment

First, an official, government-funded registry of genetically modified organisms, specifically designed for reproduction in the wild and slated to be released in the US, would make risk assessment more transparent and accountable. Similar to the US database, which lists all human clinical trials, this field trial registry would require all technology developers to disclose their intentions to publish, information about their GM strategy, the extent and location of the release, and their intentions to collect data.

This registry could be presented in such a way that intellectual property rights are protected, just as therapies participating in clinical trials are patented in their registry. The GM organism registry would be updated in real time and made fully available to the public.

Second, a wider range of risks needs to be assessed and an evidence base from third party researchers needs to be developed. Since each genetically modified mosquito is released into a unique environment, risk assessments and experiments before and during the trial release should take into account the local impact on the ecosystem and food webs. You should also examine the disease transmission potential of the mosquito’s wild counterparts and ecological competitors, examine evolutionary pressures on pathogens in the mosquito community, and track gene flow between genetically engineered and wild mosquitos.

Funding is required to identify and assess risks. The recent announcement by the US EPA to improve general risk assessment analysis for biotechnology products is a good start. However, assistance with regulation and funding of an outside advisory committee is also needed to review the assessments of genetically modified organisms released into the wild. Diverse expertise and representation of the local community would ensure a fairer and more comprehensive assessment.

In addition, independent researchers and advisors could help determine what data will be collected during the studies to reduce uncertainty and inform future large-scale publications and risk assessments.

The goal of reducing or even eliminating mosquito-borne diseases is commendable. GM mosquitoes could prove to be an important tool in alleviating global health pressures. However, to ensure their success, we believe that a legal framework for open, comprehensive and participatory decisions is urgently needed.

This article has been updated to correct the date that Oxitec withdrew its OX513 test application to 2018.

[Deep knowledge, daily. Sign up for The Conversation’s newsletter.]