When I turned 14, I made two discoveries.

First, I learned that I would never inherit my grandmother’s smooth skin. Like my father, I fought mounds and acne mounds that pressed against my face into adulthood.

Second, and more importantly, I would learn that my home was a forest on the edge of the sea.

That same year, 1998, I moved into a shabby bungalow at the headquarters of the Theosophical Society in Chennai, India. The sprawling 260-acre ecological heritage site sits at the mouth of the Adyar River, where its brackish currents flow into the Bay of Bengal. The company’s international campus has remained largely unchanged since its inception and features neoclassical colonial houses, floating trilithon archways and canton-style dormitories for visitors.

The Theosophical Society was founded in 1875 by Helena Petrovna Blavatsky, a Russian occultist. William Quan Judge, an Irish-American lawyer; and Henry Steel Olcott, an American military officer. With visions in their mouths, they raised songs of praise to universal brotherhood, comparative religion, and the unexplained edicts of nature.

In their search for self-realization, they may have seen the face of utopia in the Balsam Peninsula of South India, a world away from the industrialized west. Hallucinatory revelations and prophecies are believed to have influenced Blavatsky’s decision to establish the company’s headquarters within the teeming expanse of the Madras Presidency, as the region was called under British control. Perhaps the same floods of providence or fate drew my family to the Theosophical Society.

Blavatsky’s bungalow. With kind permission of the author.

An untimely renovation of the house and a sudden work project sent my father from Chennai for the foreseeable future. As always, my maternal grandmother and mother began piecing together the remains of his plans. They soon realized there was nowhere to stay while our apartment was being pulled apart at the seams.

My mother’s relatives were sparse but reliable. Forced or otherwise, uncles, aunts, and second cousins ​​always materialized out of the air when they were called. After my grandfather passed away, his brother – my great-uncle – took over the mantle of honorary parent and grandparent for his nieces and nephews and also for their children.

Half-remembered rumors of conspiracies revolved around my great-uncle’s nomad story. My grandmother dared to have spent a few years in West Bengal as a beggar for the Ramakrishna Mission after the death of his wife over a decade ago. An aunt put an end to this theory and scoffed that my great-uncle was indeed a laborious accountant in Calcutta, and that even he could not escape the drudgery of unpaid bills and unfed mouths. Above all, however, one fact was undeniable: he had returned to Chennai as an avowed theosophist and had lived and worked in the society ever since.

One Sunday afternoon, my mother phoned him to hear that we were about to become homeless.

Just come on, said my great-uncle. I have rooms

A week later we were a tableau of women standing on his doorstep – my grandmother, my mother, my teenage self and my little sister. When we arrived we found that his words were literal: he had prepared a single room for all of us.

The room was cave-like, with a huge, distant ceiling and spectral corners that we could fade into. There were four children’s beds with extremely thin mosquito nets on the walls. The only other piece of furniture in the room was a rosewood clothes horse, which was more appealing than functional, with its improbable curves and improbable arches that wouldn’t hold a shirt. A banded gecko chirped at us from a high window as if to say hello.

That same year, 1998, I moved to a shabby bungalow at the headquarters of the Theosophical Society in Chennai, India. The sprawling 260-acre ecological heritage site sits at the mouth of the Adyar River, where its brackish currents flow into the Bay of Bengal.

From that day on, I was properly involved in my great-uncle’s routine. He was a firm believer in teenagers, as he called anyone under 60. After experiencing and fighting through the struggle for Indian freedom, he believed that the spark was the dross of discipline for my boring youth, and explained that I would start the day during Brahma Muhurta, the hour of creation before sunrise. My mother and grandmother loved it.

Every morning at 5 a.m. he was waiting for me at the front door with his Atlas bike. I was always late and always disheveled in my school uniform, a stark contrast to his flawless presence – from the ornate folds of his Panchakacham Veshti that fell down to his ankles, to the plains of his kurta, to the swooping down on his nose his bald head, which was surrounded by silver hair, to his even eyes and even hands.

Well let’s go, he would say, without a hint of impatience in his voice. Our first stop was always the cannonball tree, a swath of fragrant, sacred flowers that covered its trunk with fleshy orange and yellow swabs. Nagapushpam, he once pointed out. The flower that resembles a snake’s hood.

Further on, the path was littered with curling knots of rosary pea pods, the red seeds of which crunched under our feet. We passed the Bodhi Tree – hunched over a pond covered with a crowd of pale Nymphaea lotus flowers that had grown from a sapling of the tree under which the Buddha attained enlightenment. At the other edge of the water, in a miniature shrine, was a sandstone image of Gautama Buddha, whose hands were arranged in the Dharmachakra mudra and set the wheels of the Dharma itself in motion.

We threw ourselves into the hustle and bustle of preparing the shrine for its morning rituals – swept the floor and around its perimeter, stripped the ceremonial lamp of any soot and wet the sandstone Buddha with a soft cloth. When I finished, my great-uncle waved for the flowers. I gave it to him and he reverently placed it at the Buddha’s feet. We stood in silence for about a minute. He laughed when I began to fidget, as if on cue. Okay ma, that’s too quiet for teenagers like you.

That was my sign of escape, as clear as a shot, and I would say goodbye if I ran around the pond. My great-uncle continued his morning rituals and ablutions at the Bharata Samaj Hindu Temple elsewhere on the Society’s campus, and then volunteered at any office that sought assistance for the day – the in-house print shop, the bookstore or in the garden department. 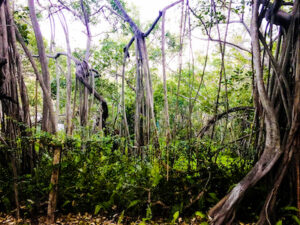 Banyan tree at the Theosophical Society. With kind permission of the author.

I used this little time package to explore society on my own. In the Zoroastrian temple, I whispered good morning to the ears of a pair of Assyrian winged Lamassu with bearded faces. I passed the large banyan tree that continued to live and breathe through its 40,000 square foot aerial root and which deliberately thrived even after its original trunk was destroyed in a cyclone. On the forked field path I took the path to the left through an orange-colored forest of silk-cotton trees, past chambers in which guests and aspiring theosophical seekers from all over the world were accommodated. Another mud fork led me deeper into the forest, through a thicket of copper capsules with their yellow feathers, and along the Adyar River as packs of robber crabs scurried into the estuary.

At last I would reach a tiny gate that is flush with a stone wall that opens up to the bay.

The gate guard had been informed through the company’s inimitable network that I should not be questioned. This gate will always be open to you, ma, he said one day. I know whose paethi, whose granddaughter you are. Hearing the Guardian’s words, I found that my great-uncle had quietly retraced the topography of our relationship, drawing our family closer together as he moved further and further outside the domestic boundaries that played out around the rest of us. The word paethi hit my neck as I stood on the empty bank. Sunlight fell over the waves: it was time to go to school.

Days and months melted together. I longed for the hectic blur of the city – jam-packed schools and festivals and dance nights, afternoons on the beach with friends, concerts on the Indian Institute of Technology campus, or just plain cable TV that hadn’t come through the city gates.

And yet. It had also been a struggle to keep up with my classmates, with their changing standards of popularity, most of which I found difficult. Every night, as I lay under the translucent folds of the mosquito net, the indescribable sounds of the night jungle and the Adyar River babbling beneath it, I took refuge in the comforting cloak of the forested darkness of society.

One morning my great-uncle pointed to the cannonball tree. It had started to spit out an abundance of perfectly spherical fruit. He picked up a gray-brown ball from the floor and tore it open. His flesh was cloudy and swirled with a deep blue, the color of night. It smells very bad, but it’s antibacterial, he said. It’s medicine.

The fourth president of the Theosophical Society, Curuppumullage Jinarājadāsa of Sri Lanka, wrote: “Just as a single organism is a unit in a larger group, so the life in each organism is also a unit in a larger group called the group soul. “My 14 year old self would have made fun of the idea of ​​a group soul. But at that time, with the gray twilight and the stinking cannonball fruit and the figure of my great-uncle looming against the trees, it seemed that Jinarājadāsa was right.

Maybe I was on the cusp of something immeasurable, a composite whole – if only for a moment.