By Chris Jewers for Mailonline

Infected mosquito bites from more than two decades ago left a Cambodian man’s leg five times its normal size due to an untreatable parasitic disease.

Bong Thet, 27, is forced to drag the painful limb across the floor while shuffling around his family home in Kampong Chhnang Province.

He once dreamed of being a footballer but has not been able to kick a ball properly since the illness began when he was only six years old. 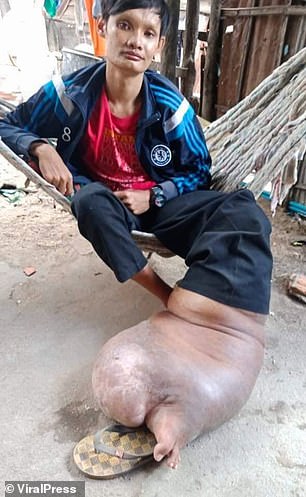 Bong Thet, 27, was bitten by mosquitoes when he was young, causing his leg to swell five times as much as normal. He once dreamed of becoming a footballer, but his condition means he has not been able to kick a ball in more than two decades

Bong said the tumor developed from small wounds on his foot that his parents ignored because they thought the scratches were from playing outside.

However, when he was 12 years old, small lumps grew around his foot and completely covered his leg.

His parents, who worked in a nearby factory, could not afford medical treatment in the poverty-stricken country and his condition deteriorated over the years. 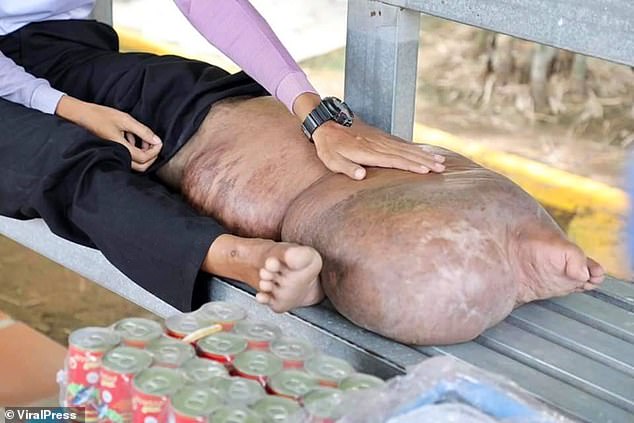 By the time he was 12 years old, small lumps had grown around his foot and completely covered his leg, causing him to drop out of school because he was unable to walk long distances 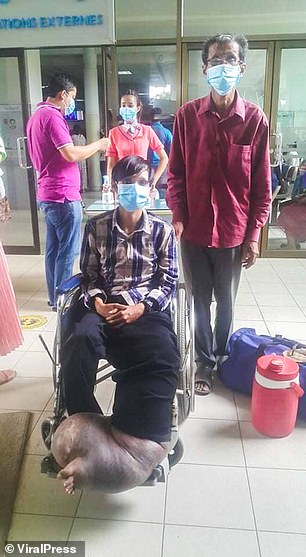 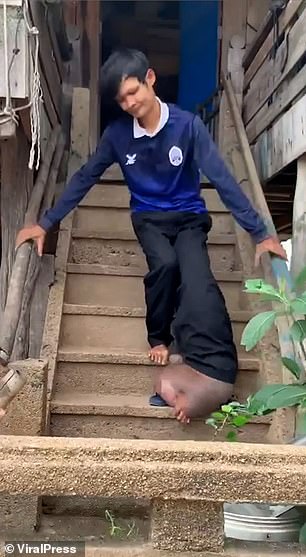 A businesswoman heard of Bong’s condition and gave his family 10,000,000 Cambodia riels (about 1,900 pounds) for treatment. However, the condition – which is a parasitic disease of lymphatic filariasis – is untreatable

According to the CDC, lymphatic filariasis is a parasitic disease caused by microscopic, thread-like worms.

The adult worms only live in the human lymphatic system, which maintains the body’s fluid balance and fights off infections.

Mosquitoes carry the disease and spread it from person to person.

People with this disease may have lymphedema (swelling of the limbs) and elephantiasis, and men may also experience a swelling of the scrotum called hydrocele.

Lymphatic filariasis is the leading cause of permanent disability worldwide, and communities often avoid those affected by the disease.

The resulting disabilities can make work and daily tasks very challenging for those affected.

About 38.5 million people were infected in 2015 and most common in tropical Africa and Asia.

He had to stop going to school because it was difficult for him to walk long distances. Even when he was valiantly present, the other children kept teasing him about his leg.

The sick person endured his illness for more than two decades without seeing specialists, until the Good Samaritans heard his story and offered to pay for his treatment earlier this month.

Businesswoman Dana Try gave 10,000,000 Cambodia riels (around £ 1,900). The money paid for Bong’s medical expenses and was able to visit a hospital for the first time.

After doing a blood test, doctors found that he had lymphatic filariasis, a parasitic disease caused by thread-like worms.

They said it was possible that he contracted the parasites from mosquito bites that he scratched and bled at a young age, i.e. the wounds.

It is one of the leading causes of disability in the world, but no known vaccine or cure for the disease is yet known.

Bong was disappointed to learn the disease was incurable, but he was still grateful to the people who gave him donations.

“That will make my life easier and knowing that there are people who take care of me makes me happy,” he said. “I am so grateful to you for helping. The money is paid for medicines and food.

“I will continue to take the medication the doctors have given me to make my life more comfortable.” 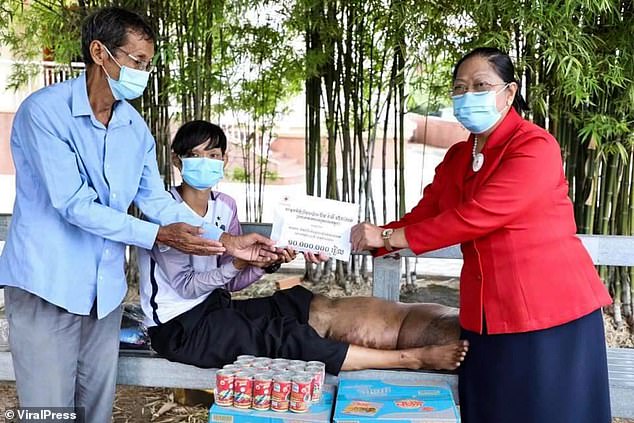 Although Bong learned that there was no cure for the disease, he said he was grateful for the diagnosis and grateful that people out there had helped him. Pictured: businesswoman Dana Try gives Bong’s family 10,000,000 Cambodia Riel (£ 1,900) 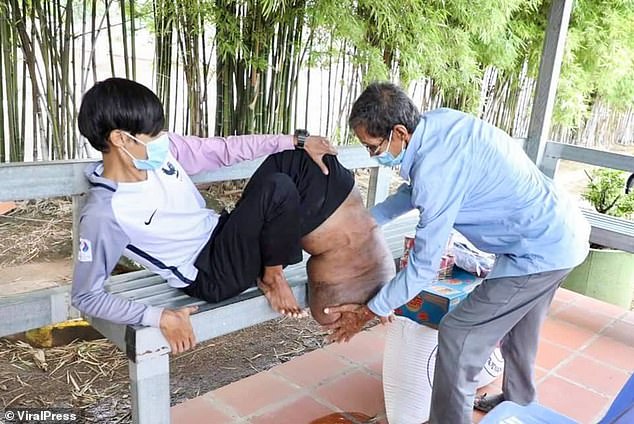 The parasitic disease is caused by thread-like worms and is one of the leading causes of disability in the world. However, no vaccine or cure for the disease is yet known

As a part of the community marketing campaign: Evaluation of the fundamentals of transmission, prevention and therapy of malaria