The gametocyte stage of the malaria parasite has been shown in the field to heavily manipulate the blood-searching behavior of vector mosquitoes by making it more attractive to bite an infected host.

This is accomplished by causing the host’s red blood cells to produce volatile compounds that attract malaria vector species, such as: B. Mosquitoes in the Anopheles family.

It was shown back in 2017 that the increase in the production of volatile compounds such as certain aldehydes and terpenes by the host’s red blood cells is specifically induced by a molecule made by gametocytes called (E) -4-hydroxy-3-methyl-but-. 2-enyl pyrophosphate, also known as HMBPP.

A study published in 2017 and conducted by Ingrid Faye’s group found that 95% of blood-seeking mosquitoes were attracted to the HMBPP-supplemented blood when they chose between uninfected blood and uninfected blood with HMBPP added. This finding (among other things) showed how blood-dwelling malaria parasites directly and indirectly manipulate their host’s odor profile to increase the likelihood of transmission.

For more information on HMBPP and this research, see a previous article on BugBitten.

Until recently, however, the extent to which volatiles induced by malaria parasites would affect the attractiveness of humans to anopheline mosquitoes, nor the ability of HMBPP to attract mosquitoes without a human odor had not been investigated. A recent article by Debebe and colleagues in BMC’s Malaria Journal therefore attempted to test the effectiveness of an HMBPP-induced odor mixture in attracting wild female mosquitoes in the natural environment.

The odor mix consisted of several aldehydes and terpenes in proportions intended to mimic the “natural” odors induced by HMBPP released by gametocyte infected red blood cells in a malaria infected person.

Assessment of the attractiveness of the HMBPP-induced odor mixture Map of the study area in Ethiopia. Source.

To test the preparation of mosquito-attracting smells in the field, the researchers decided on Arba Minch Zuria, one of the most malaria-infected areas in southern Ethiopia. Anopheles arabiensis and An. Pharoensis are the main species of mosquito responsible for transmitting malaria in this area.

The experiments consisted of a two-choice behavioral test consisting of a tent with or without human volunteers (as a source of human odor) and two pipes extending from each tent (to carry the odor) and extending traps onto two different host baits (HDT). These HDTs (used to capture attracted mosquitoes) contained either the HMBPP-induced odor mixture or heptane (as a control).

In the course of the experiment, 2114 Anopheles mosquitoes were caught together in both the control and the odor trap. Of these, mosquitoes caught in 1931 (91.3%) were identified morphologically as Anopheles arabiensis and the other 8.7% (183 individuals) as An. Pharoensis. 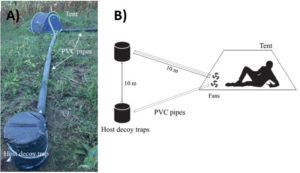 A) Photo of tent, pipes and HDT used in experiments. B) Schematic representation of the two-choice behavior test. Source.

In addition to these findings, the researchers showed that the HMBPP-induced odor mix, when combined with human odor, attracted significantly more attraction. Arabiensis mosquitoes and almost twice as many caught as the HDT control (HMBPP-induced odor mixture and heptane). This “differential augmentation”, as the authors point out, also occurs in patients who are infected with both P. falciparum and P. vivax gametocyte stages.

Based on these results, the authors concluded that the production of HMBPP most likely underpinned these observed increases in malaria vector attraction to those with gametocyte-stage infection and that the odor induced by gametocyte-stage parasites in red blood cells is highly manipulative of the host Search for the behavior of malaria vector mosquitoes and thus a considerable increase in the efficiency of the transmission of malaria from host to host (vector capacity). • Image of the house and odor flow – the host produced odors that were channeled out of the eaves pipe (red circle) and pull malaria vectors away from people (blue line). Source.

This study by Debebe and colleagues builds on previous laboratory research and is the first to demonstrate these results in field conditions. Not only are these results fascinating, but they also have implications for integrated vector management and could provide novel methods for studying and controlling mosquitoes. One such application is to combine HMBPP with eaves pipe technology. The authors propose venting air laden with human odor out of homes through pipes embedded in the eaves so that that air is directed to HDTs supplemented with the HMBPP-induced odor mixture to effectively divert blood-hungry malaria vectors to the traps.

While this would be an inexpensive and easily reproducible vector control measure, the authors note that a remaining challenge is to develop a long-lasting HMBPP-induced odor mix formulation. It will be interesting to see if the upcoming research can achieve these future goals and develop a novel vector control and management tool.