Frisco announced on September 18 that two more mosquito pools in the city had tested positive for the West Nile virus. In a press release announcing the positive tests, city officials said they would step up surveillance efforts and use larvicides if necessary if stagnant water or larvae are observed.

One of the pools was located near Panther Creek Parkway and Teel Parkway in the Grayhawk neighborhood.

The other pool was south of Main Street in the Village Lakes area between Legacy Drive and Teel Parkway. 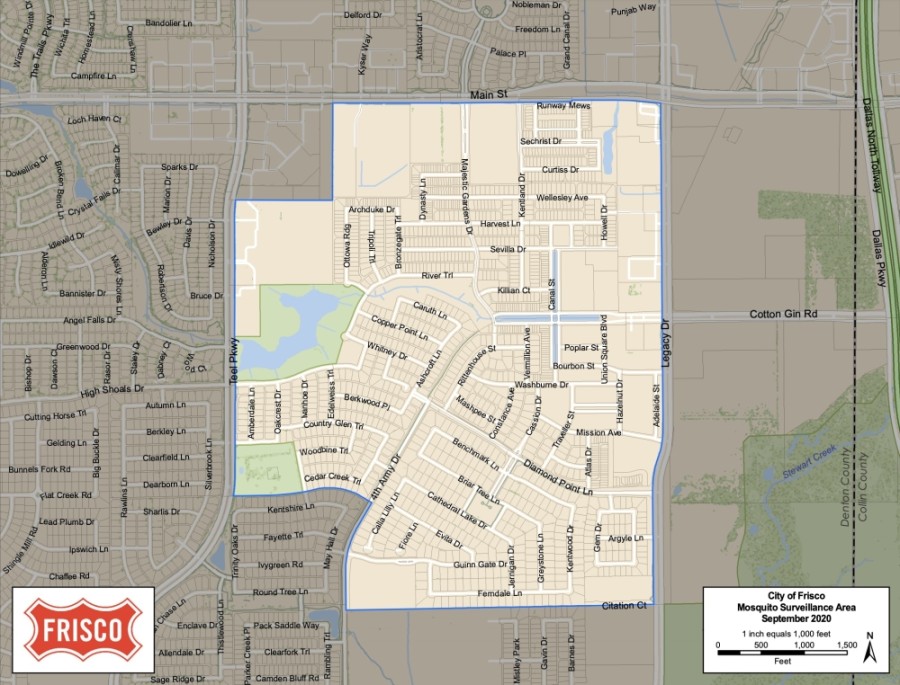 The city shared a list of West Nile virus precautions sponsored by the Texas Department of Health:

• Use approved insect repellants that contain DEET, picaridin, or lemon eucalyptus oil when you go outside.

• Drain off stagnant water that collects in bird baths, French drains, clogged gutters, saucers under potted plants, and “splash blocks” at the end of the drainage gutters.

• Wear long sleeves and trousers in the morning and evening light.

• Use air conditioning and make sure doors and windows have intact screens.

The latest positive results bring Frisco’s total to 14 mosquito pools that tested positive for West Nile virus this season. No human cases of the virus have been confirmed in Frisco, although Plano officials announced on Sept. 2 that a human case had been identified there.

Frisco started testing for mosquitoes on May 1st.

The Village Lakes neighborhood near Copper Point Lane was also the location of the eighth positive pool, which was confirmed by the city on Aug. 14.

Frisco confirmed the first positive test of a mosquito pool near Oakbrook Park along Hickory Street on May 29.

The Cottonwood Creek Greenbelt area was the location of the second positive test reported on June 5th. Frisco then sprayed on mosquitoes in the area from July 11th to 12th, July 25th to 26th, August 1st to 2nd, August 8th to 10th and August. 29-30 after the fourth through seventh and tenth mosquito pools tested positive for West Nile virus.

The third positive test was confirmed on June 22, when city officials said they would step up surveillance efforts and target areas near Whitefish Lake Drive and the Plantation Springs neighborhood. Plantation Springs is just south of Lebanon Road and north of the Sam Rayburn Tollway on the east side of Frisco.

The ninth positive test was reported on August 21 near Hickory Creek, near the intersection of Hickory Street and Preston Road.

Frisco confirmed the 11th and 12th positive pools on Sept. 11 along Hickory Street near Oakbrook Park and along North County Road near Warren Sports Complex.